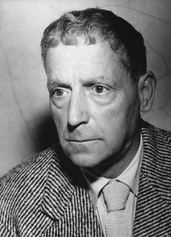 Paul Dessau (Hamburg, 19 december 1894 – Königswusterhausen, 28 juni 1979), German composer and conductor. While in French exile he used the pseudonyms Henry Herblay and Peter Daniel.
Dessau was born in Hamburg into a musical family. His grandfather, Moses Berend Dessau, was a cantor, his uncle, Professor Bernhard Dessau, concertmaster at the Opera Unter den Linden, his cousin Max Winterfeld became generally known under the name Jean Gilbert as a composer of operettas and his second cousin, Robert Gerson Muller-Hartmann, was a composer and collaborator with Vaughan Williams.
From 1909 he majored in violin at the Klindworth Scharwenka Conservatorium in Berlin. In 1912 he became répétiteur at the City Theatre (Stadttheater) in Hamburg. There he studied the work of the conductors Felix Weingartner and Arthur Nikisch and took classes in composition from Max Julius Loewengard. He was second conductor at the Tivoli Theatre in Bremen in 1914 before being drafted for military service in 1915.
After World War I he became conductor at the Intimate Theatre (Kammerspiele), Hamburg, and was répétiteur and later Kapellmeister at the opera house in Cologne under Otto Klemperer between 1919 and 1923. In 1923 he became Kapellmeister in Mainz and from 1925 Principal Kapellmeister at the Municipal Opera of Berlin under Bruno Walter. In 1925 he was awarded the SCHOTT Composition Prize for his Concertino.
In 1933 Dessau emigrated to France, and 1939 moved further to the United States, where initially he lived in New York before moving to Hollywood. In New York he met Bertolt Brecht with whom he worked together on several projects from 1942 on. Dessau returned to Germany with his second wife, the writer Elisabeth Hauptmann and settled in East Berlin in 1948.
Starting in 1952 he taught at the Public Drama School (Staatliche Schauspielschule) in Berlin-Oberschöneweide where he was appointed to a professorship in 1959. He became a member of the Deutsche Akademie der Künste in Berlin in 1952 and was vice-president of this institution between 1957 and 1962. He taught many master classes.
From 1954 he was married to the choreographer and director Ruth Berghaus. Their son Maxim Dessau (b. 1954) is a film director.
Dessau died on 28 June 1979 at the age of 84, in the then East German city of Königs Wusterhausen, on the outskirts of Berlin.