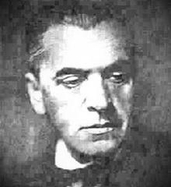 
Vladimir Michailovich Dechevov (St Petersburg 1889 – Leningrad 1955) studied at the St Petersburg Conservatory, where his teachers included Anatol Liadov and Maximilian Steinberg. He held various teaching posts, and as a composer he cultivated a moderately modern style somewhat related to Prokofiev, Honegger and Poulenc. In the 1920s he wrote several compositions which catch the dynamic mood of his time - the period of industrialisation. The piano piece Rel’sy (Rails) is a clear example of so-called machine music. His opera Ice and Steel (1930), with its instrumental prelude to the second act entitled The Iron Foundry in Operation, was compared to Shostakovich’s The Nose. After several successful performances the work became entirely forgotten until it was played again in 2007 by the Saarländische Staatstheater. In his autobiography Notes without Music Darius Milhaud expressed his esteem for Dechevov's talent.
W.H.
Lit.: D.Shen : V.M.Dechevov, Leningrad 1961

If John Adams’ Nixon in China in 1987 grabbed headlines by choosing a historical subject that was virtually contemporary (a mere sixteen years on), Ice and Steel, from 1929, portrays events from eight years before, the 1921 Kronstadt rebellion. But unlike Nixon, no recognizable figures are impersonated onstage. Instead, this is an opera of the masses that chimes with Bolshevik ideology, with a vast cast of named, yet unknown or possibly disguised, characters – no less than 56!  The booklet notes that accompany this DVD are invaluable giving much needed background to the historical events and the factions that threatened to derail the revolution in its early years.
When the opera was premiered, critics felt that its music was not weighty enough for the august subject. Eighty years later, it is Boris Lavrenjov’s libretto that seems flimsy: a one-dimensional piece of propaganda that gives the music no room to manoeuvre. No one elicits our sympathy, not surprising as the one role of any profile is an anarchic sailor Dymchenko who is pitted against inflexible zealots of Bolshevik authority; and to identify with him would have been ideologically suspect. Thus, we witness a depersonalized pageant that the music intermittently brings to life.
Vladimir Deshevov (1889-1955), an almost exact contemporary of Prokofiev, became an avant-gardist in the experimental Bolshevik twenties, after an extended conservative composing youth. Most of his music has disappeared, though he himself survived the transition to Stalin’s ultra-reactionary regime relatively unscathed, by returning to the conservatism of his youth. A miniature excerpt from a theatre score, Rails, is the only piece that occasionally surfaces, usually in the company of other early industrial Soviet music such as Mosolov’s Iron Foundry, which is a source for the exhilarating machine music in Act Two of Ice and Steel.
However, the music comes across as uncertain in tone and confused in aim. The opera opens in Petrograd’s black market, with decadent goods on offer – cocaine, silk undies, carved walking-sticks – with a modernist twelve-note (i.e western and bourgeois) ‘black market’ theme (which sounds disconcertingly soft-centred and Scriabinesque); but then, later in the same scene, the White Russians’ nostalgia for the Tsarist age is conjured up with a backward sounding sentimental trumpet waltz. Thus, the decadent crowd is confusingly associated with music that is both modernist and reactionary.  Does the brutal machine music in Act 2, where the starving workers defy their Bolshevik leaders, glorify the industrial age, or depict the brutality of the bosses? When Bolshevik ideals are sung, it is to tub-thumping uplifting marches, a Soviet sound-world familiar to those who know their Shostakovich and Prokofiev, but without those geniuses’ gift for parody and ambiguity.
The production, from Saarbrucken, is visually dazzling, the costumes particularly so, and the extreme stylization of the chaotic crowd scenes aids clarity, though sometimes at the expense of fervour and excitement. The singing parts are mostly declamatory and angular, cast from Saarbrucken’s strong ensemble: Yevgeny Taruntsov’s thuggish sailor exudes charisma, glamour and menace, and Hiroshi Matsui’s Hertz is a compelling figure of brute force and Anna Toneeva is the steely rabble-rouser Musya. It’s a shame that Oxana Arkaeva’s top register can’t quite do justice to the few tiny lyrical breadcrumbs that are scattered in the final scene. None of these leading characters are established enough to develop and the in-your-face fervour of much of the proceedings can teeter on the risible, despite countless vivid cameo moments from the ensemble. The musical preparation of this awkwardly written score is highly accomplished, and Will Humburg and the orchestra shape proceedings and shade dynamics expertly, adding nuance to an often over-emphatic idiom. This fascinating rarity, from a buried operatic period, is well worth investigating, compact enough (95 minutes) not to outstay its welcome.
[first published in OPERA magazine]
JULIAN GRANT 2009