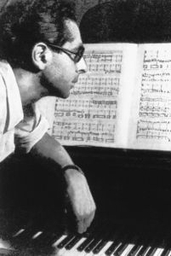 Paul Arma (Hungarian: Arma Pál, aka Amrusz Pál; born Imre Weisshaus; 22 November 1905 in Budapest – 28 November 1987 in Paris) was a Hungarian-French pianist, composer, conductor and ethnomusicologist
Arma started pianolessons at the age of 5 and studied under Béla Bartók from 1920 to 1924 at the Franz Liszt Academy of Music, after which time he toured Europe and America giving courses and piano recitals. He left Hungary in 1930 for Germany (and became assistent to Hanns Eisler), but had to flee in 1933 (after he was arrested by the nazis). He went to the U.S. but settled down in Paris shortly after, where he became the piano soloist with Radio Paris. He changed his name into Paul Arma.
The war forced him underground. During that time he focused on collecting songs from partisans and resistance (maquis). He also wrote a cycle of short pieces entitled Les Chants du Silence on texts of French writers such as Eluard, Ramuz, Claudel and Romain Rolland. These pieces were published in 1953 with coverdesigns by fellow-painters such as Chagall, Picasso, Matisse, Braque and Léger.
After the war he restarted his carreer as a (piano)performer, but spent most of his time composing. He also continued his study of folkmusic (also American).
From 1954 on electronic music drawed his attention.
Paul Arma devoted his life not only to music, he also created musical sculptures. Exhibitions of his work were shown in Budapest (1984) and Paris (1985, Centre Pompidou).
Several choreographers, among others Martha Graham, used Arma's music.