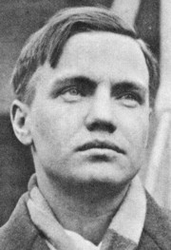 The American pianist and composer George Antheil (Trenton NJ, 1900 – New York, 1959) studied music theory under the Liszt pupil Constantin von Sternberg in Chicago, and composition with Ernst Bloch in New York. As a youngster in his twenties, he read in the newspaper that the impresario Martin H. Hanson was looking for a pianist in the 'fiery ultra-modern genre’. He set to work at the piano like one possessed, auditioned for Hanson, and was sent to Europe without delay. There he caused furore with piano recitals in which he mostly played his own pieces - wild, pounding music with titles like Airplane Sonata, Sonata Sauvage and Death of the Machines. It brought Antheil the controversial reputation of an anti-romantic, anti-expressive futurist. And the concerts not infrequently ended in a riot; menacing with his automatic pistol, which as a true-born 'yank' he carried in a silk armpit holster under his dress suit, he usually managed to calm down his audience. Except at a concert in Paris in the mid 1920s, during the opening of the Ballet Suédois, when the situation got so out of control that fighting broke out and the police had to make arrests. Another spectacular occasion was the first performance of Ballet Mécanique, originally intended for a film by the painter Fernand Léger and written for eight pianos and percussion. The performance took place in the studio of a young American woman, who, surrounded by duchesses, princesses and other blue blood, was doing her best to climb up the ladder of Parisian society.
Unfortunately, Antheil's success remained limited to Europe. The first American performance of Ballet Mécanique (Carnegie Hall, New York, April 1927), now even in a version with sixteen pianos, anvils, saws, car hooters and a genuine airplane propeller driven by a wind machine, was a disaster. As was the Jazz Symphony written for the occasion (judged to be inferior to 'real jazz', even though it was played by W.C. Handy's complete black band).
Rediscovered, performed once more and recorded by Reinbert de Leeuw and the Netherlands Wind Ensemble, the two works (and the wild violin sonatas) were warmly received during the Holland Festival in 1976.
The snappy, politically tinted opera Transatlantic, Antheil's greatest success in Germany, and the Satie-like La Femme 100 Têtes inspired by Max Ernst, marked the end of his so very vital European period. Having sown his wild oats and returned to his fatherland in 1933, he settled in Hollywood in 1936 and wrote only in a very moderate and stale idiom.
Antheil's autobiography, finally entitled Bad Boy of Music after other titels had been discarded ('Not even my dog', Dogs on the roof, I don’t see anything yet, Twenty-five years in a leaky canoe, My best overcoat and Angel Face), was published in 1945 and contains wonderful - though not always entirely truthful - descriptions of life in the 'roaring twenties'.
W.H.
(with thanks to Elmer Schönberger)