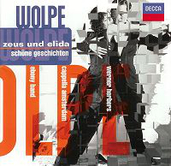 It was good to see a second review of the Stefan Wolpe CD in Decca’s ‘entartete Musik’ series – not because John Story’s assessment of this fascinating disc lacked in enthusiasm, but because the headnote, quite uncharacteristically for Fanfare, garbled the name of conductor Werner Herbers, founder-leader of the Ebony Band.

This unique ensemble, which recently celebrated its 10th birthday, is not exactly, as James H. North put it, ”a large jazz ensemble plus 12 violins”, and it deserves to be better known to your readers. Herbers is the principal oboist of the Royal Concertgebouw Orchestra, and the core of the Ebony Band consists of colleagues who share his interest in modern, adventurous music from the first half of the 20th century, especially unjustly forgotten music by lesser-known composers. During its first decade, the ensemble has performed no fewer than 270 works by almost 100 different composers, mostly presented in thematically arranged programs (such as ‘Entartete Musik’, ‘Bauhaus’, ‘Novembergruppe’, Donaueschingen 1921-26’ etc.);

It also delves into so-called light music and jazz.

It is via the latter that I first became aware of the Ebony Band, in the form of a CD (guest-conducted by Gunther Schuller) of music by Robert Graettinger, known (if at all) for his City of Glass, written for the most ambitious edition of Stan Kenton’s orchestra; since then, the intrepid Herbers has found enough Graettinger material for a second CD (both on the Dutch Channel Crossings label). More recently, Herbers has delved into an even more obscure jazz composer-arranger, George Handy. For such ventures, the Ebony Band is augmented by jazz specialists, but the core of the musicians are quite at home with any 20th century idiom. Other items on the Ebony Band discography include two volumes of Erwin Schulhoff works (on Channel Classics), and a collection of music from the Spanish Civil War, including Revueltas. Their live performances have included collaborations with the Dutch Film Museum, and, of course, the world premières of the two short Wolpe operas that are the centerpieces of the CD that triggered this little birthday encomium to a very special ensemble.