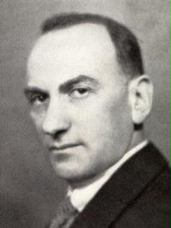 The Sextet was composed between July 16 and October 1, 1938 in Hollywood. The 'Pendulum' was conceived in July, 1928 in New York for a wind quintet.
The first performance was given in Los Angeles at a concert of the League of Composers of New York under auspices of the Los Angeles chapter of Pro Musica and the Crescendo Club in Los Angeles on May 16, 1941, and was received very favorably by the audience and the press.
Achron has written a great many compositions and transcriptions for Orchestra, Chorus, Chambermusic, Instrumental and Vocal Solos with Orchestra and Piano; music for Stage and Screen.
The Sextet is the second composition published by the New Music Edition, the first being the 'Statuettes' for piano.
The Sextet consits of four movements:
I   Contemplatively
II  With graceful motion
III Fanfare / Pendulum
IV  Dance Improvisation