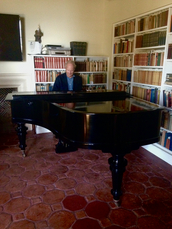 News, In the Spotlight

During a trip to Los Angeles, Werner Herbers visited the "Villa Aurora", the home in which Lion Feuchtwanger lived after he fled from Europe, and where many of his fellow emigrants, like Thomas Mann, Albert Einstein, Hanns Eisler and many more, got together on a regular basis. Among them Ernst Toch, one of the most successful composers of the Weimar Republic around 1930, who, once in America, declared himself to be "the most forgotten composer of the 20th century". In "Villa Aurora" it turns out, his grand piano can be found: how much closer to a composer can one get? An overwhelming experience.