The Dada pieces and their origins

Schulhoff’s enthousiasm for the Dada movement was aroused by a Dada Soirée in Berlin on 24 May 1919. It inspired him to write a number of Dadaist compositions, the first of which was the 5 Pittoresken für Klavier, which includes the ‘John Cage avant-la-lettre silence piece’ In Futurum. Among his other Dada works are the Sonata Erotica and the Symphonia Germanica. For many years there were grounds for scholars to doubt whether these two pieces really existed. No music was to be found, and there was no mention of them in the list of works published by the Schulhoff biographer Josef Bek. What is more, the composer himself only mentioned them once, in an article for the Berlin periodical ‘Dada’ in early 1920.

As artistic director of the Ebony Band, I undertook intensive research in Prague in the early 1990s. I thus made the acquaintance in May 1993 of the musicologist Jaromir Paclt (1927-1994), the biographer of the composer Miroslav Ponc and a leading authority on the rich musical life of Czechoslovakia in the 1920s and ‘30s. It turned out - much to the surprise of Schulhoff’s biographer Bek - that Paclt possessed copies of the manuscripts of the two unknown pieces. The autographs, however, have never been traced.

It seems unlikely that the two pieces were ever performed in the composer’s day, unless it was during one of the evenings held at his sister Viola’s house at Ostbahnhofstrasse 28 in Dresden, where in June 1919 he had moved in, and where there were frequent lively gatherings of a colourful array of artists. The pieces may also have been intended for a special Dada evening which Schulhoff intended to organise (as he informed Alban Berg in a letter dated 27 June 1919), but which never took place. But it should also be mentioned that the Symphonia Germanica, as it is notated (‘zur Anwendung sämmtlicher Gliedmassen’ – for the utilisation of all limbs), is an example of conceptual art rather than a piece for live performance.

The (probable) world premiere of the Sonata Erotica was given by the Dutch actress Loes Luca at a concert by the Ebony Band on 30 November 1993 in Amsterdam. Performance of the piece – written for a non-existent instrument called the ‘Solo-Muttertrompete’ (Solo-Mothertrumpet) and suitable, according to Schulhoff, ‘for men only’ – requires a certain daring and lack of inhibition. Not least at the end, where the prescribed sanitary activities may present a particular challenge to the performer. If this is so, the solution we would suggest is that the performer withdraws behind a screen or offstage to pour water into a zinc bucket, with or without amplification.

A performance by Loes Luca may be admired on YouTube.

The Sonata Erotica has been published by the Ebony Band Edition and is on sale for € 20.-. The edition is completed with an introduction in English and German. 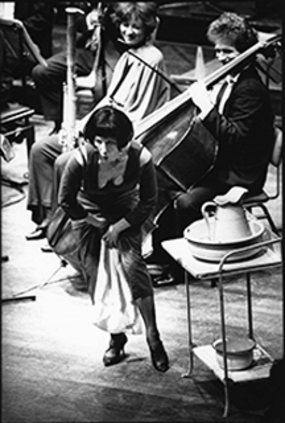 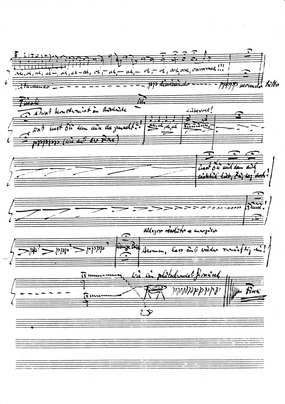