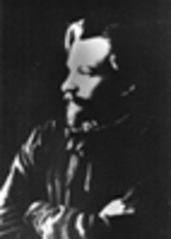 Nikolai Andreevich Roslavets (4 January 1881, Dushatino/Ukraine  – 23 August 1944, Moskou) was, according to Stravinsky,  the most interesting Russian composer of the 20th century. He became a leading figure in Russian musical life during the 1920s.
After his first violin- piano- and theory-lessons in Kursk, Roslavets was accepted as a student at the Moscow Conservatory in 1902 where he studied violin under Jan Hřímalý, free composition under Sergei Vasilenko, counterpoint, fugue and musical form under Mikhail Ippolitov-Ivanov and Alexander Ilyinsky. He graduated in 1912, gaining a silver medal for his mystery Heaven and Earth after Byron's poetic drama.
While still a student, Roslavets he already begun to experiment with new modes of expression which would subsequently lead to an own, free-tonal language, a new system for organizing sound, that, in its result, had similarity with the 12-note system Schönberg formulated 10 years later.
In the 1910s Roslavets' compositions were published in Russian Futurist journals, and futurist artists designed some covers for his music. That's why Roslavets was called 'the Russian Schönberg', although his music didn't sound like Schönberg; his language was more derived from Skrjabin.
After 1917 the composer became one of the most prominent public figures of "leftist art" in Russia, together with Arthur Lourié, Kazimir Malevich, Vsevolod Meyerhold and others. Roslavets taught violin and composition in Elets, Kharkiv (then known as Kharkov, where he was director of the Musical Institute) and Moscow. He had a position in the State Publishing House, edited the journal 'Muzykalnaya Kultura' and was one of the leaders of the Association for Contemporary Music (ASM).
The direction of his artistic sympathies is also apparent from his support for performances of music by composers of the Second Viennese School and his authorship of articles including one on Schönberg's Pierrot Lunaire and one entitled 'On pseudo-proletarian music'.
In 1927 Roslavets' cantata October was played in a concert in Moscow celebrating the 10th anniversary of the Revolution. On the same program were Shostakovitch' Second Symphony and Mosolov's Iron Factory.
In spite of his success and his prominent position in Russian musical life, his works had been under attack from the adherents of 'prolerarian music', especially members of the RAPM (the Russian Association of Proletarian Musicians), who claimed them as counter-revolutionary and bourgeois art for art's sake. The endless political warfare sapped Roslavets's strength. In 1929 he was denounced as an 'enemy of the people' and in 1930 was forced to publicly repent of his former artistic conviction. Nevertheless, the Sovjets went to law in order to sentence him to death. It was one of the first ideological cases in the Sovjetunion.
After the 16th Communistic Party Congress, an exercise of devotion to Joseph Stalin, held during 26 June - 13 July 1930 in Moscow, Roslavets' name was expunged from official encyclopedias and history books. He was banned to Tashkent and did some unimportant work at the Musical Theater and the local Radiostation.
in 1933 the composer returned to Moscow, where earned a meager living teaching at the Polytechnic Institute and was later required to train military band leaders. A victim of the political purges, Roslavets could get no official position for the remainder of his life. After a severe stroke in 1939, the authorities stopped the trial. Roslavets was a semi-invalid until his death following a second stroke in 1944.
The compositions Roslavets wrote during the dark years of Stalinist repression, were written in a more tonal language, sometimes based on Russian tradition, hoping for a positive reception - in vain.
It would take until 1980 to hear Roslavets' music performed in the USSR. Ever since, a few of his works were rediscoverd, published and recorded, while many of them are still lost.