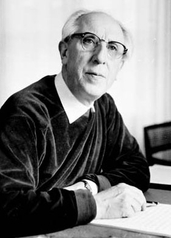 Hilding Rosenberg (June 21, 1892 – May 18, 1985), was the first Swedish modernist composer, and one of the most influential figures in Swedish 20th century classical music. He is considered Sweden's most important composer of the 20th century, a central figure of modern Swedish music. To think of Swedish music without Rosenberg would be similar to disregarding the presence of a Carl Nielsen in Danish music.
Born in Bosjökloster, he was an organist, concert pianist and music teacher until 1915, when he began studying at the Stockholm Conservatory under Ernst Ellberg. His teachers also included Richard Andersson and Wilhelm Stenhammar.
In 1920 he embarked on his first journey abroad, coming into contact with the music of Schönberg in Dresden and Berlin, and that of Stravinsky and the neo-classicists in Paris. It was his decade of experiment.
On several occasions, Rosenberg's compositions from the early 1920s were creating great commotion. The first performance of his First Strinquartett (1923) provoces the music critic and composer Peterson-Berger, to exclaim that it is the work of a madman (see String Quartett no.1). Even the first performance of the Chamber Symphony (1924) causes such an uproar, that the composer was compelled to withdarw the work (and later even burned it). During the second half of the 1920s, Rosenberg turned his interest to neo-classicism and a study of Bach, which culminated in the Fourth Piano Sonata of 1927.
In 1931 he was appointed assistent conductor and coach of the Swedish Royal Opera, in 1934 he became its first conductor. In 1948 Rosenberg visits the USA, conducting the Chicago Symphony and receives a commission (1951) from the Louisville Orchestra. In 1956 he becomes an honorary member of the International Society for Contemporary Music (ISCM).
His works include six opera's and six ballets, eight symphonies, vocal and chambermusic (14 stringquartets).