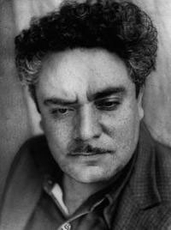 Silvestre Revueltas was born on new year’s eve of 1899 in Santiago Papasquiaro in the Northern Mexican province of Durango. He began playing the violin at the age of eight and studied violin and composition between 1918 and 1922 at the Chicago Music College. In the 1920s he toured as a violin soloist and conductor through the southern United States and Mexico, until the composer Carlos Chavez, at that time Mexico’s most important musical authority, asked him to come back to Mexico to be his assistant with the Orquesta Sinfónica de México.
This orchestra’s recent establishment was very much part of a movement which, following the revolution of the ‘teens’, was concerned with restoring the fledgling Mexican state to its true identity and overcoming foreign (particularly American) domination.
Revueltas became aware that this endeavor would not be served by re-interpretations of European classics, and concluded that he himself could make an important contribution by devoting himself to composition.
In the 10 following years he produced an oeuvre, composed at a feverish pace, in which he combined influences from European art music with traditional elements of pre-Columbian folk music.
In 1936 he was appointed secretary-general of the LEAR, the League for Revolutionary Artists and Writers, and in that capacity he visited an anti-fascist congress in 1937/38 in civil war-ravaged Spain. He expressed his support for the republican cause with new compositions and performances of his own works, but, seeing the hopelessness of the struggle, he returned, bitterly disillusioned, to Mexico.
His compositions became darker, his idealism evaporated.
A year before his death he wrote that he was dreaming of ‘distant’ lands and preferred to drum on an ordinary washtub while fantasizing about beautiful music—“as a child I already preferred dreaming to doing something useful”.
His constitution ruined by alcohol, he died of pneumonia in 1940.
W.H. (with thanks to Prof.Roberto Kolb, Mexico)
litt.: Antonia Teibler-Vondrak : Silvestre Revueltas, Musik für Bühne und Film, Böhlau Verlag.