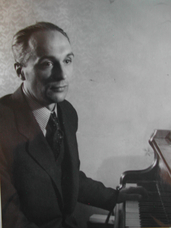 Konstanty Regamey – composer, writer on music, pianist and Indologist, was bornin 1907 in Kiev into a musicians’ family of mixed descent (Swiss, Polish, Russian, Italian…). In 1920, he fled with his mother from the Ukraine, which was torn by civil war, and arrived in Warsaw. His father (likewise called Constantin), a pianist and composer of Swiss-Polish descent who remained in the region annexed by the Soviet Union, was a teacher at the conservatory and director of music at Kiev Radio.
In 1937, at the height of Stalinist terror, he was imprisoned and executed after a fake trial. His son never saw him again after 1920, nor learned the date and circumstances of his death, facts that were only recently discovered by the musicologist Jerzy Stankiewicz.
As a child, Regamey was taught music by his parents; instead of attending a music school he took private lessons in piano and harmony. After studies at the University of Warsaw, the École des Hautes Études and Collège de France, and a doctorate (1935) in Indology and comparative grammar of Indo-European languages, he was appointed lecturer at the University of Warsaw. It was at this time that Regamey
became a leading figure among writers and critics advocating new music. He was one of the organizers of the ISCM Festival in Warsaw in April 1939, and was re-elected vice-president of the Polish section of this society in June 1939.
After the outbreak of the war, Regamey was no less active than in other periods of his life. He was a member of the Clandestine Musicians’ Association and worked on two books (a history of modern music and a history of linguistics). His status as a Swiss passport holder (inherited from his father) made him valuable for the clandestine administration of the underground state institutions organized by the Home Army.
Although former Polish citizens had been forbidden to listen to foreign radio stations on 10 October 1939, and on 15 December the confiscation of all radio sets was ordered, Regamey was the legal owner of a radio set, and, thanks to his knowledge of various languages (Portuguese and Romanian were particularly useful, as English and French broadcasts were jammed by the Nazis) he was able to prepare reports
on the international political situation for clandestine information bulletins. He placed the sign of the Swiss Red Cross on the door of his apartment and gave shelter to many people in hiding. However, with the arrest of all visitors of the Café Arkadia, where he played at the time, he became a suspect and had to discontinue this work.
As a courier under the pseudonym Drogowski, he transported arms, dollars and microfilms that were exchanged between the Polish Government in exile and the Government Delegate’s Office at home.
He earned his living performing in cafés, as was the case with Lutoslawski, Andrzej Panufnik and many other eminent musicians.
After the Warsaw Uprising - between the end of September and mid-October 1944 Regamey was in various camps – thanks to his Swiss citizenship he was sent from Stutthof to transit camps, and was released to fetch documents from the Swiss Consulate in Berlin. He arrived in Switzerland around 20 November 1944 and settled in Lausanne until 1988, leading a successful life as an Indologist, and to some extent as a composer as well, although his two major operas still await performance.
Regamey himself explained the juxtaposition of different styles in the above works, and the role of music for a composer in the tragic years of occupied Poland: “An artist who is constantly close to death, and is aware that his piece can be the last or maybe the only one, is tempted to say everything in this one work.”

Katarzyna Naliwajek-Mazurek PhD
Member of the Institute of Musicology of the University of Warsaw. 2009 Feicht
Award winner of the Musicologists’ Section of the Polish Composers Union (doctoral
dissertation on the music and aesthetics of Regamey)