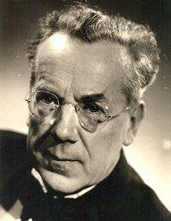 Karl Rankl (1 October 1898, Gaaden – 6 September 1968, St.Gilgen) was a British conductor and composer of Austrian birth.
Rankl studied with Arnold Schoenberg as a private pupil for four years beginning in 1918. His first appointment was as chorus master at the Volksoper in Vienna in 1922 where he later became an assistant conductor. This was followed by appointments in Liberec in 1925, Königsberg in 1927 and the Kroll Oper in Berlin where he served as assistant to Otto Klemperer from 1928–1931. He became associated with Klemperer's advocacy of modern music. After a brief conducting stints in Wiesbaden and Graz, he became director of the 'Neues Deutsches Theater' in Prague in 1937. While there he conducted the first performance of Krenek's Karl V. At the outbreak of World War II he took refuge in England and became a British citizen
He became music director of the Royal Opera House, Covent Garden, in 1946.
He resigned in 1951 and, in the following year, became conductor of the Scottish National Orchestra, with which he remained for five years. In 1958 he accepted the post of director of the proposed Sydney Opera, but because of the delay in the completion of the opera house he never had the chance to take up the appointment.
As a composer, Rankl wrote eight symphonies and a string quartet, the latter of which was first performed at Graz in 1936. He also wrote one opera, Deirdre of the Sorrows (based on J.M. Synge's play), which won one of the prizes offered by the Arts Council for the Festival of Britain in 1951. Rankl's reputation today however, lies almost entirely on his work as a conductor. His opera has never been performed and none of his music has ever been published.