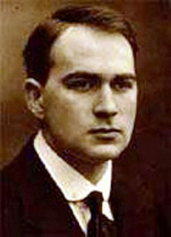 Sándor Jemnitz, born in Budapest, 9 Aug 1890, died in Balaton Földvár, 8 Aug 1963. Hungarian composer, critic and conductor. He studied composition with Koessler at the Budapest Academy of Music (1906–8) and then went to the Leipzig Conservatory, where he was a pupil of Reger (composition), Nikisch (conducting), Straube (organ) and Sitt (violin).
Between 1911 and 1913 he was active in several smaller opera companies: as répétiteur at Bremen and as conductor at Czernowitz (now Černovice), Jihlava and Scheveningen. He lived in Berlin from 1913 and there took further composition lessons from Schoenberg and began to write studies on music, publishing several articles in 'Die Musik' in 1914–15.
In 1916 he returned to Hungary. He wrote for various newspapers and periodicals before becoming regular music critic of the daily paper Népszava (1924–50), in which post he established himself as one of the most respected Hungarian critics of the period. He was a propagandist for modern music but also helped to make the Classics more widely known; at the same time he reported on Hungarian musical life for the foreign press. From 1945 to 1947 he was president of the Workers' Cultural Union, and he was editor-in-chief of the periodical Éneklő munkás from its foundation in 1947, as well as editor of Éneklő nép. In addition, he taught at the Budapest Conservatory from 1951. During his last years, when he was no longer writing criticism on a regular basis, he published several popular monographs on composers.
As a composer Jemnitz remained to the end of his life faithful to the spirit of his two great teachers: his tightly woven, elaborate textures are rooted in Regerian counterpoint, but he was also quite strongly influenced by the expressionist Schoenberg of the 1910s. There was little response to his work within Hungary, but he gained a considerable reputation in western Europe. His first published work, the Piano Sonata no.1, was favourably received by Die Musik in 1915, and thereafter more than a dozen of his youthful pieces were published by Wunderhorn. An important point in his career was the performance of the String Trio no.1 by Hindemith's ensemble at the Donaueschingen Festival of 1924. This was followed by performances of his music at ISCM Festivals (1927, 1929, 1933, 1935) and several awards, including prizes from Schott (1927) and Universal Edition (1933). At the same time, his articles, which display a wide-ranging knowledge, his organizing activities and his pressing for Hungary to take a more active part in the ISCM all made him a well-known and widely respected figure abroad. He was in personal contact with Adorno, Berg, Pisk, Reich, Schoenberg and Stein.