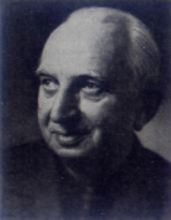 Max Butting was the son of an ironmonger and of a piano teacher. He received his first musical instruction from his mother and later from the organist Arnold Dreyer. After attending secondary school (Realgymnasium), he studied at the Akademie der Tonkunst (Academy of Composition) in Munich from 1908 to 1914. There, he received instruction in composition from Friedrich Klose, conducting from Felix Mottl and Paul Prill, as well as singing from Karl Erler. He also attended lectures in psychology, philosophy and musicology at the Munich University. Butting learned composition by private instruction from Walter Courvoisier, for the most part, whom Klose had recommended to him after a disagreement.
Butting was not called for military service in the First World War due to bad health. On the urging of his father, he worked as an assistant in his father's business when he returned to Berlin in 1919, where he remained until 1923. However, he was allowed sufficient free time for composing. He quickly got in contact with other young artists and became friendly with Walter Ruttmann and Philipp Jarnach, among others. In 1921, Butting was admitted into the left-wing Novembergruppe and he led their musical events until 1927. In 1925, he was also a musical journalist for the "Sozialistischen Monatsheften" (Socialist Monthly Magazine). His works became better known through performances at the music festivals of the Gesellschaft für Neue Musik (Society for New Music), where Butting worked as a member of the board in the German section between 1925 and 1933, and at the Donaueschinger Musiktage. In 1929, Hermann Scherchen conducted Butting's Third Symphony in Geneva, which also brought him recognition at the international level. In the same year, the composer became the vice-chairman of the Genossenschaft deutscher Tonkünstler (Co-operative of German Composers).
Max Butting was one of the first composers to confront his art with the medium of radio. He was thus a member of the cultural advisors of the Funkstunde (Radio Hour) from 1926 until 1933 and the leader of a studio for radio interpretation at the Klindworth-Scharwenka Conservatory from 1928 until 1933. Aside from that, he held master courses in radio composition at the Rundfunkversuchsstelle (Radio Experimental Office) of the Berliner Hochschule für Musik (Berlin College of Music), where Ernst Hermann Meyer was one of his students.
In January 1933, Butting was even named a member of the Prussian Academy of Arts, however it became clear soon after Adolf Hitler took power that he was not wanted by the National Socialists. Until 1938, Butting was still able to work in the copyright company, STAGMA. After that, he again had to exist from his father's ironmonger business, partial ownership of which he had inherited after his father's death in 1932, and which he took over on his own at the beginning of 1939. To ensure the survival of the business and thus be able to support himself, the composer finally found himself obliged to join the NSDAP in 1940.
After the Second World War, Butting gave up his business activities and lived as a freelance composer in East Berlin. In 1948, he became a member of the Kulturbund der DDR (Cultural Association of the DDR) and chief editor in the state radio committee of the GDR. In 1950, he was a founding member of the Deutsche Akademie der Künste (German Academy of the Arts), of which he was vice-president from 1956 until 1959, and a board member of the Verband Deutscher Komponisten und Tonsetzer (Association of German Composers, the VdK of the GDR) as of 1951, as well as the leader of the advisory council of the Anstalt zur Wahrung der Aufführungsrechte (AWA, Institute for the Protection of Performance Rights). In the GDR, Butting received numerous honors: he received the silver Patriotic Order of Merit in 1961 and later in gold, an honorary doctorate from the Humboldt University of Berlin in 1968, and the National Prize of East Germany in 1973.