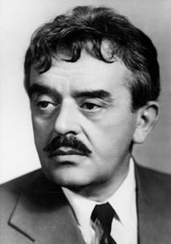 Emil František Burian (1904-1959) had talents in many directions which went far beyond music. He was active as a stage director, actor, theatre director, writer, publisher, filmmaker and concert organiser.
In 1924, as a pupil of Josef Suk and J.B. Foerster, he founded the ‘Přítomnost’ (Presence) Society, propagating not only the music of the Second Viennese School and the French avant-garde, but also the symphonic jazz of Paul Whiteman. His own work is strongly influenced by dada, futurism and jazz.

In 1923-29 Burian worked for a number of Prague cabaret theatres and avant-garde groups and composed three operas, one of which, the jazz opera Bubu de Montparnasse, received its first performance only in 1999.
At the ISCM festival in the Italian Siena (1928), his jazzy Voiceband for chorus readers and instruments caused a sensation.
In 1933 Burian established his own theater, called the D-34, in Prague, providing a stage for explicitly political and anti-fascist theatre. It remained open until he was arrested by the Nazis in 1941 and taken to Theresienstadt, from where he was deported to Dachau and Neuengamme. Much of his work, including
Voiceband, was seized and destroyed.
Burian survived the war and promptly reopened his theatre. He devoted
himself untiringly to his work, despite the burden of the communist dictator. At the Festival of Venice in 1947 he received an award for his music to the film Siréna.
Burian died in Prague in 1959.
The Ebony Band performed many pieces by Burian. Most are 'light', in the sense of being lucid, elegant, and often influenced by jazz, futurism or dada.