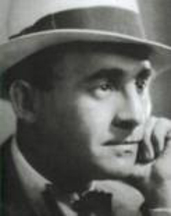 Max Brand was born in 1896 in Lemberg (now Lviv, Ukraine) and moved with his parents to Vienna around 1900. After attending several private schools he studied composition with Franz Schreker from 1919, initially in Vienna and later in Berlin. In 1924, when he returned to Vienna, a performance of Arnold Schönberg's Wind Quintet op. 26 made such a deep impression on him that his music was influenced from then on by twelve note technique, as illustrated by his Fünf Biblische Balladen op. 5 (1925) and Kyrie Eleison for a cappella choir (1940).
In the final years of the Weimar Republic, Brand enjoyed his greatest triumphs, culminating in the opera Maschinist Hopkins, first produced at the municipal theatre of Duisburg on 13 April 1929. In this work Brand combines elements of Schreker's opera aesthetics, Schönberg's twelve note technique and constructivism, the New Objectivity in the manner of Kurt Weill, and elements from jazz as Ernst Krenek had done a few years before in his successful opera Jonny spielt auf.
For the Nazis, Brand's opera was 'degenerate' in every respect: some of the action takes place in a factory, and the plot deals with envy, corruption, murder, espionage, prostitution, revenge, blackmail and exploitation of the worker. Among the idioms employed are futuristic machine sounds, jazz and twelve-note music. Despite all this - or because of it - Max Brand's opera was a resounding success; until 1932 it was performed in thirty-seven other opera houses and translated into three languages.
Plans to premiere Brand's new opera Requiem under the eminent conductor Karl Böhm in the Berlin Staatsoper in 1933 were obstructed by the new rulers on the grounds of the composer's Jewish origins and what were considered to be the leftist views of a culture Bolshevist.
Brand fled via Prague and Switzerland to Brazil in 1938, where he became acquainted with the composer Heitor Villa-Lobos and worked with him for some time. In 1940 he emigrated to the USA, remaining there until 1975 and working as leader of a theatre company and vice-president of the American League of Authors and Composers from Austria. His scenic oratorio The Gate was produced by the New York Metropolitan Opera in 1943.
In the 1950s Brand met up with the electro-technician Robert Moog, who built the composer's first synthesiser, set up a studio in his home in New York and came into contact with the electronics studio in Cologne.
The composer returned to Austria in 1975 and died in complete oblivion in 1980. His studio and the earliest synthesiser are preserved in the Max Brand Archive in the museum of Langenzerdorf (near Vienna).