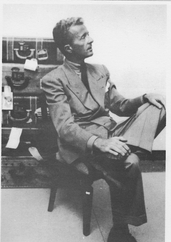 Paul Frederic Bowles (Jamaica, NY, 1910 - Tangier, Marocco, 1999), composer and writer.
In the late 1920s and early 30s he studied with Aaron Copland, Virgil Thompson (New York) and Nadia Boulanger (Paris), and lived in Europe and North America. Between 1936 and 1963 he occasionally wrote music for the New York theatre, being associated with Orson Welles, William Soroyan and Tenessee Williams.
In 1948 he settled for life in Tangier. The major part of his compositional output dates from before 1949, the year in which his first novel, The Sheltering Sky, appeared. From that time on he was more active as a writer and translator than as a composer. His literary output comprises novels, numerous short stories,  poetry, essays, translations. and an autobiography, Without stopping (1972).
His music is nostalgic and witty, evocative in its use of American jazz, Mexican dance and Maroccan rhythm, and exclusively in short forms - the operas are constructed as suites of songs.
By contrast the fiction is dark, despairing, and formally extended. 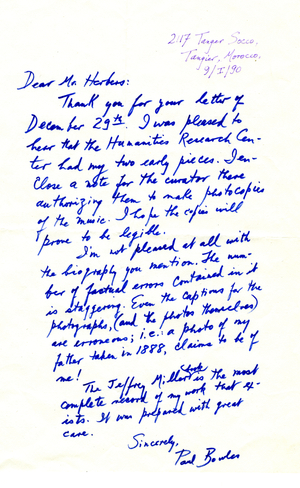