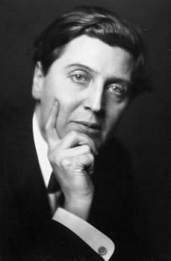 Alban Maria Johannes Berg (February 9, 1885 – December 24, 1935) was an Austrian composer. He was a member of the Second Viennese School and produced compositions that combined Mahlerian Romanticism with a personal adaptation of Schoenberg's twelve-tone technique.
He was more interested in literature than music as a child and did not begin to compose until he was fifteen, when he started to teach himself music. In late February or early March 1902 he fathered a child with Marie Scheuchl, a servant girl in the Berg family household. His daughter, Albine, was born on December 4, 1902.
. He had very little formal music eduction until he began a six-year period of study with Arnold Schoenberg in October 1904. Schoenberg was a major influence on him; Berg not only greatly admired him as a composer, but many people believe that he saw him as a surrogate father. (Berg's own father died when he was 15.)

For the first two years of his studies under Schoenberg, Berg worked as a civil servant, but from 1906 he concentrated on music full-time, and in 1907 saw the first performance of his work: three of the Seven Early Songs were given in a concert of music by Schoenberg's pupils in Vienna.

In 1913, Berg's Five songs on picture postcard texts by Peter Altenberg were premiered in Vienna. The piece caused a riot, and the performance had to be halted: a complete performance of the work was not given until 1952.

From 1915 to 1918, he served in the Austrian Army and it was during a period of leave in 1917 that he began work on his first opera, Wozzeck. Following World War I, he settled again in Vienna where he gave private music lessons. One of his students was Hanns Eisler. He also helped Schoenberg run the Society for Private Musical Performances—which sponsored new work by promising composers.

The performance in 1924 of three excerpts from Wozzeck brought him his first public success. Wozzeck, which Berg completed in 1922, but was not performed in its entireity until a performance conducted by Erich Kleiber in 1925. The opera is today seen as one of his most important works; a later opera, also critically acclaimed, Lulu, was left incomplete at his death.

Berg is probably best known for his Violin Concerto, which, like much of his work, combines atonality with tonal passages, and uses Schoenberg's twelve tone technique in a way as to admit Wagnerian harmonies. Other well known Berg compositions include the Lyric Suite (thought to be a big influence on the String Quartet No. 3 of Béla Bartók) and the Chamber Concerto for violin, piano and 13 wind instruments.

Berg died on Christmas Eve 1935, in Vienna, from blood poisoning caused by an insect bite.