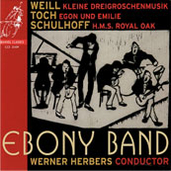 
Weill, Toch and Schulhoff wrote their pieces in the late roaring twenties of the last century. Inspired by jazz and entertainment, these live recordings - of which two are premier registrations! - belong to the 'most musical and varied period in music history' according to founder, conductor and artistic leader Werner Herbers.

Weill wrote an orchestral suite for wind orchestra only four months after the Berlin premire of his Threepenny Opera (1928) by adapting eight of its most successful numbers. Toch moved to Berlin in 1929 and became one of the most frequently played living composers of his time. 'Egon und Emilie' is a satire on opera based on a charmingly mischievous libretto by the famous German poet and humorist Christian Morgenstern.

The text, is a monologue by a grand diva having a nervous break_down, caused by the indifference and lack of interest of her companion Egon. In 1930, Schulhoff, together with Otto Rombach, a dramatic author, writer, and journalist with the Frankfurter Zeitung, wrote the Jazz Oratorio 'H.M.S. Royal Oak', inspired by an actual event dating from 1928 when a violent quarrel had arisen among three officers about the music played by a small band in the officers' mess.