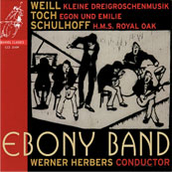 Werner Herbers is a serious musician. The photo on the inner flap of this release certainly gives this impression. Those of us who remember him as principal oboist of the Concertgebouw orchestra also remember how the entire orchestra would give the impression of revolving around him when in the middle of a solo, such was the intensity which he gave to each performance; indeed, to each note. As a greenhorn composer just arrived in Amsterdam in 1987-88 Werner very kindly allowed me to work on the piano in his house. The piece I was sweating over is long forgotten, but his generosity lives on in my memory, and as a result he can do no wrong. Fortunately, even with such a declaration hanging over this review, it is very easy to have a high regard for Werner Herbers’ Ebony Band from any objective point of view. His revival of remarkable and stunning scores from undeserved but perhaps unsurprising neglect and obscurity have made this band the vehicle for some uniquely valuable projects. The resonances which grew out of the Stan Kenton orchestra experiments by composers such as Robert F. Graettinger have been allowed to echo on into our times thanks entirely to his efforts.

Kurt Weill’s Kleine Dreigroschenmusik doesn’t fall into this class of obscurity, the Threepenny Opera having retained popularity and notoriety since its conception in 1928. Weill was forced out of Germany by the forces set in motion through the rise of Hitler, but the influence of American jazz and other popular forms can already clearly be heard in the suite which covers all of the hits from this famous collaboration with Berthold Brecht. As expected, the Ebony Band play this music with style and bite, rather sweeping aside the not unattractive but rather swampily recorded Gulbenkian Orchestra conducted by Michel Swierczewski on Nimbus. The Ebony Band’s qualities in this music are more comparable with the old favourite 1970s London Sinfonietta recording conducted by David Atherton on Deutsche Grammophon. There are differences in inflection, and Atherton’s trombone is more fun at times. In terms of stylistic conviction and verve the Ebony Band is every bit as good however, and in some places more convincingly European-sounding - some of the London Sinfonietta tracks could almost be Ealing Comedy rather than Berlin Nightclub.

While the Kleine Dreigroschenmusik is relatively familiar, the other two works on this CD most emphatically are not. Another wartime émigré, Ernst Toch had been a remarkably well known composer in his brief time in Germany before his career was interrupted by Nazi domination. Egon und Emilie is a satire on opera on a libretto by Christian Morgenstern, whose humorous and absurdist texts owe something to the kind of material represented by English eccentrics such as Edith Sitwell. The piece is a monologue by an operatic diva suffering a nervous breakdown - the result of being ignored by her largely silent partner Egon, who finally gives a misogynistic speech, picks up his things and leaves, granting us the proverb, “Speech is silver, silence is golden”. One of the inner flaps of this gatefold package shows the histrionic female giving her all, while our Egon sits in his evening dress reading a book, looking for everything like a bourgeois caricature from a George Grosz cartoon. Recorded in a slightly dry and tubby acoustic, this is still a decent recording of a very fine performance, in particular by soprano soloist Elena Vink. The music is of that anti-romantic New Objective style which is typical of the period, but poses few difficulties. Indeed, the piece is full of a kind of jolly wit and humorous inflection, albeit of a rather Teutonic nature.

Erwin Schulhoff has since the 1990s become a more familiar name, as one of that unfortunate list of ‘degenerate’ composers who did not survive the war. This focus on representatives of the ‘entartete musik’ and Erwin Schulhoff in particular was one of the strands in which Herbers and the Ebony Band took a leading role. Their two volumes of his works on Channel Classics are essential listening for those interested in the period. H.M.S. Royal Oak is a Jazz Oratorio, dubbed by the writer and collaborator Otto Rombach as “an attempt at finding a form for a radio play which is not limited to the radio.” As such it works superbly on CD with everything present, and no heavy treading on the stage to indicate any missed dramatic action. The texts are all delivered in the original German, but translated in the booklet. Basically, the events are based on a real story about a quarrel on board the huge eponymous vessel, three officers who get themselves into a violent argument about the music played by a small band who performed in the officers’ mess. The prelude to all of this was if anything more remarkable, jazz music having been forbidden by the admiral of the ship, with an open mutiny following as a consequence.

The piece is full of marvellous moments and colourful jazzy orchestration. If, for instance, you know Bix Beiderbecke’s ‘Barnacle Bill the Sailor’, then you will surely relish the baritone saxophone glops in the second Rezitazione. Listeners afraid of heavy Germanic weather in this piece should be informed that it is in fact a real find, filled with favourable winds, great fun, and performed and sung with true refinement and gusto. True humour can only be delivered straight, and Werner Herbers resists any temptation to throw in gimmicks, allowing the truly inventive and strikingly clever score to speak for itself. Schmaltzy salon-orchestra ‘Palm Court’ moments exist alongside real dances, the insidiously mild and vibrato-laden chorus of saxophones equal to the strings in a superb Tango-Interlude. Cracking syncopated rhythms infect the Fox fugato, and there is also some well delivered ‘sprechstimme’ here and elsewhere. Little references and associations fizz throughout the piece, and I found myself musing both on Weill’s ‘Alabama Song’ and Frank Zappa’s ‘Valley Girl’ in the penultimate Panama-Song. Performers both vocal and instrumental, choral and solo, are all brilliant, and the large Vredenburg venue means we get a spacious and generously proportioned recording in which to revel in all this new stuff.

The cover illustration for this release is a 1925 lino print, ‘Jazz Musicians’ by Dutch artist Jef van Jole, and is a perfect choice for this excellent release. Everything is very fine here, but the real find is H.M.S. Royal Oak. There may be MWI readers who don’t feel inclined to hear how German humourists took the mickey out of the British in this piece, but I hope we can take it on the chin. This is a piece which is packed with surprising and remarkably high quality music, and the last Finale e Spirituel is as good as anything by Stravinsky in a comparable genre. All of the performances are live, but there is no audience noise or applause, the unequal nature of the different environments an easily acceptable trade-off for having such a well balanced programme in a single outstanding artefact.